Who is the Antichrist? 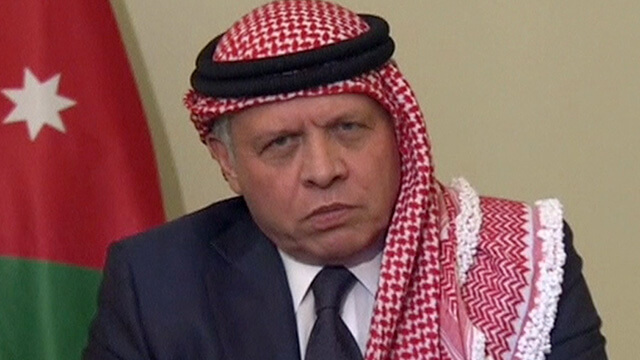 Since the prophecies concerning the end time are all coming to pass now, it is certain that the Antichrist and the False Prophet are alive on the earth at this very moment. Both of them are undoubtedly in power right now or very near the reigns of power. We probably already know the names of these men, but just don't know who they are yet.

The bible tells us that we will be able to identify the Antichrist when the time is ripe. That day shall not come until that man of sin be revealed.

2 Thess 2:3 Let no man deceive you by any means: for that day shall not come, except there come a falling away first, and that man of sin be revealed, the son of perdition;

One distinct possibility concerning the Antichrists identity is the Jordanian King Abdullah II. There are several reasons for thinking this.

There are over fifty specific prophecies concerning the Antichrist in the books of Daniel, Revelation and II Thessalonians alone. We will discuss a few of these in order to develop a profile whereby this man can be identified when we see him rise to power.

The Antichrist is definitely a man

Dan 7:21 I beheld, and the same horn made war with the saints, and prevailed against them; 22 Until the Ancient of days came, and judgment was given to the saints of the most High; and the time came that the saints possessed the kingdom. 23 Thus he said, The fourth beast shall be the fourth kingdom upon earth, which shall be diverse from all kingdoms, and shall devour the whole earth, and shall tread it down, and break it in pieces. 24 And the ten horns out of this kingdom are ten kings that shall arise: and another shall rise after them; and he shall be diverse from the first, and he shall subdue three kings. 25 And he shall speak great words against the most High, and shall wear out the saints of the most High, and think to change times and laws: and they shall be given into his hand until a time and times and the dividing of time.

Dan 11:37 Neither shall he regard the God of his fathers, nor the desire of women, nor regard any god: for he shall magnify himself above all. 38 But in his estate shall he honour the God of forces: and a god whom his fathers knew not shall he honour with gold, and silver, and with precious stones, and pleasant things.

He's not the devil himself as some teach, but he is definitely a man who has "fathers". The devil does not have "fathers" nor does a "system".

Rev 19:20 And the beast was taken, and with him the false prophet that wrought miracles before him, with which he deceived them that had received the mark of the beast, and them that worshipped his image. These both were cast alive into a lake of fire burning with brimstone.

Rev 20:1 And I saw an angel come down from heaven, having the key of the bottomless pit and a great chain in his hand. 2 And he laid hold on the dragon, that old serpent, which is the Devil, and Satan, and bound him a thousand years, 3 And cast him into the bottomless pit, and shut him up, and set a seal upon him, that he should deceive the nations no more, till the thousand years should be fulfilled: and after that he must be loosed a little season.

Dan 7:11 I beheld then because of the voice of the great words which the horn spake: I beheld even till the beast was slain, and his body destroyed, and given to the burning flame.

This passage says that the 4th beast, the representation of the Antichrist (the little horn), is slain and his BODY destroyed. This is the same declaration we see in Rev 19 where the Antichrist and False Prophet are cast into the lake of fire. He is most definitely a man.

He will confirm the covenant with many for seven years

In this Old Testament verbiage, a week means a "week of years", or seven years (Genesis 29:27). The confirmation of the covenant is this: there will be an international agreement to confirm the status of Jerusalem and the permanent borders of Israel. These things are being fought over right now with the Palestinians. The Antichrist will confirm the covenant along with many others. It may be hard to identify him at that time. In the midst of this "week" (three and one half years in), the Antichrist will cause the animal sacrifices being performed in the rebuilt temple to cease, and will cause the "abomination of desolation" by either claiming to be God or acting in the place of God. That is when we will definitely know who he is.

The Antichrist will arise among a union of ten kings

Dan 7:24 And the ten horns out of this kingdom are ten kings that shall arise: and another shall rise after them; and he shall be diverse from the first, and he shall subdue three kings.

We've talked about this in previous chapters. We see that he will arise out of a union of ten nations. And he will uproot, or subdue, three kings (states or nations).

Rev 17:12 And the ten horns which thou sawest are ten kings, which have received no kingdom as yet; but receive power as kings one hour with the beast. 13 These have one mind, and shall give their power and strength unto the beast.

The ten kings will give their power and strength to the Antichrist.

When we see a man rise among a ten-nation union subduing three kings (the leaders of states or nations), watch closely and know that the time is near!

His kingdom will be the revived Holy Roman / Ottoman Empire

The Antichrist will use peace as a weapon

Dan 8:25 And through his policy also he shall cause craft to prosper in his hand; and he shall magnify himself in his heart, and by peace shall destroy many: he shall also stand up against the Prince of princes; but he shall be broken without hand.

He will most likely rise from the horror of World War 3, the sixth trumpet, and will use peace to gain his power and control over the world. By peace he shall destroy many. In his arrogance, he will stand up to Jesus Christ at the seventh trumpet, but he will not win, of course.

Matt 24:14 And this gospel of the kingdom shall be preached in all the world for a witness unto all nations; and then shall the end come. 15 When ye therefore shall see the abomination of desolation, spoken of by Daniel the prophet, stand in the holy place, (whoso readeth, let him understand:) 16 Then let them which be in Judaea flee into the mountains:

The event Jesus is referring to in Matthew 24:15 is Daniel 9:27 and Daniel 11:31. The Antichrist will confirm the covenant for seven years and will be an abomination to God and will make it (the holy place; the Temple) desolate.

Dan 11:31 And arms shall stand on his part, and they shall pollute the sanctuary of strength, and shall take away the daily sacrifice, and they shall place the abomination that maketh desolate.

2 Thess 2:4 Who opposeth and exalteth himself above all that is called God, or that is worshipped; so that he as God sitteth in the temple of God, shewing himself that he is God.

This event Paul is referring to in 2 Thessalonians is also the 'abomination of desolation'. Three and one half years after the confirmation of the covenant, he will sit in the rebuilt temple of Jerusalem and claim to be God. Most believe that he will claim to be all god's and all messiahs. He will probably claim to be the god of Islam, Buddhism, etc. When you see this happen, you will know without a doubt that he is the Antichrist.

He will be regarded as brilliant

Daniel 7:8 and Revelation 13:5 say that he will have a mouth speaking great things. Daniel 8:23 describes him as 'understanding dark sentences'.

Rev 13:7 And it was given unto him to make war with the saints, and to overcome them: and power was given him over all kindreds, and tongues, and nations.

Dan 7:21 I beheld, and the same horn made war with the saints, and prevailed against them;

God's people will be persecuted. Since Satan is behind all of this, it's not surprising. Power is given to him over all nations...

The number of his name will be 666

Rev 13:18 Here is wisdom. Let him that hath understanding count the number of the beast: for it is the number of a man; and his number is Six hundred threescore and six.

We don't have any idea at this time what this will mean, but it will become clear when the time comes.

Who is he? It's impossible to know at this time, but here are some things to remember:

1. He will be one of many who confirms the covenant and signs a world sanctioned peace agreement with Israel for 7 years.

2. He will "stand up" about 8 months after that, and will begin putting his plans into action to take over the world.

3. He will team up with the false prophet at some point and they will work together to put these plans into action.

4. In the middle of the seven years he will actually sit in the temple claiming to be god.

That is when we will absolutely know who he is. We may have some clues before then, especially when he's putting his plans into action, but when he sits in the temple claiming to be god is when we will know for certain.

There are two who I think make good candidates at this time.

As noted above, keep an eye on the Jordanian King Abdullah II. He could very well turn out to be the Antichrist one day soon.

Another is Turkeys president Erdogan.

Both of these men seem to fit the profile well enough that they could end up being the man described in the Bible as the Antichrist.

Watch and pray! Study scripture and learn what God has to say to us, and obey Him in every thing! Praise His holy name!

Also see: Islam in the Bible