Now, this is the kicker... the cement that holds it all together... this shows us how it will all happen... 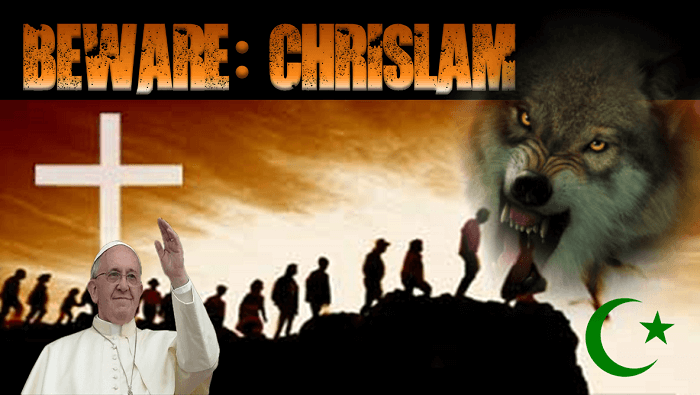 It is incredibly eye-opening to learn that Catholic prophecy bears a very similar mirror of Biblical prophecy, where the Antichrist will be the "Great Monarch" and will be promoted by an "Angelic Pope" and they will fight the real Jesus (believing He is their antichrist) much the same as with Islamic prophecy. Thus, Catholics will be prone to the same exact deception as Muslims and will think it's their prophecy coming to pass when in fact it's the Bible's Antichrist and False Prophet causing the world to worship the Beast which is essentially Satan.

There are thousands of "prophecies" that have come from Catholics over the last 1700 years, and many conflict with each other, but there is a central theme of belief in The Great Monarch (which some believe is the second coming of Apollo), and the last Pope (St Malachy's prophecy of the 112th Pope, who just happens to be the current Pope Francis), and that this last Pope will work with the final emperor (The Great Monarch) to drive apostates out of Islam, Judaism and Christianity to combine all religions into one global religion.

As we've seen with Islamic prophecy, the devil engineered it so closely with Biblical prophecy that it will fool the world into believing it is their prophecy coming to pass when in fact it will be the opposite and will be the Antichrist and False Prophet as told to us in the Bible.

Catholic prophecy mirrors Islamic prophecy of the Muslim Jesus (the final Pope) and the Mahdi (the final emperor) and the Dajjal (the real Jesus) when He returns to destroy the enemies of God.

So, it's a mind blowing revelation to learn how all these things will work together to fool the entire world!

Common belief is that this final emperor will appear on the scene at the same time as the final Pope.

Democracy will be seen as a failed system and the world will be ready to accept a socialist monarchy (already happening among the Western World's youth).

A "just war" will take place to drive out the "apostates", which will end up being WW3, the 6th Trumpet War of the Bible, and will kill over 2 billion people.

It is very likely that this war is that which causes the world to feel enough fear to put themselves in the hands of the Antichrist, whom the Bible tells us will obtain his kingdom and power by flatteries, and his brilliance with "a mouth speaking great things", and "by peace" will destroy many.

In the name of peace he will be fighting wars and subduing the world that did not already give him their allegiance. The Bible shows us the Lion, Bear and Leopard (most likely Britain, Russia and Germany) will align with the kingdom of the Antichrist (10 Islamic kings who give him their power), and these combined powers will subdue the remaining nations of the world.

Rome, and the Great Whore (the Vatican) will ride upon this union and the False Prophet will cause the world to worship the Antichrist through miracles done in the sight of men by the power of Satan.

We know from Biblical prophecy that the last ruling "broken, divided" co-empire was and is the Holy Roman / Islamic Ottoman empire, and that it will be the last kingdom ruling when Jesus returns. It is very likely that the Pope will crown the Antichrist (The Great Monarch) as King of the Holy Roman Empire.

Pope Francis has called the world to "get ready for the end time" and appears to believe these Catholic prophecies and may even see himself as the earths savior and believes himself to be this prophesied Pope.

He is the greatest promoter of Interfaithism and is working very hard to bring the world under a One World Religion, and the New World Order.

He has had Islamic prayer in the Vatican, has been to prayer in Islamic Mosques, and has met with the top Islamic Imam stating the "the meeting itself is the message".

We are well into, and well on the way to further Biblical fulfillment...

Jesus will be coming soon!

We can see that the whole world will be fooled by the false prophet and the Antichrist, including the Muslims and the Catholics! The Muslims will believe it is their Mahdi, while the rest of the world will follow the interfaith movement into believing that being a Muslim is the same as Christianity in that we all worship the same God and therefore will enjoy the same salvation. As stated, the Catholic church has already included Islam as part of God's people and many Christian churches are following this belief. This means that everyone who is fooled by this will think it's perfectly ok to convert to Islam. I hope you understand that this is the lie that will fool the whole world and is NOT true! Do Not Believe it!